Andrew Elwood will be so missed

Home Andrew Elwood will be so missed 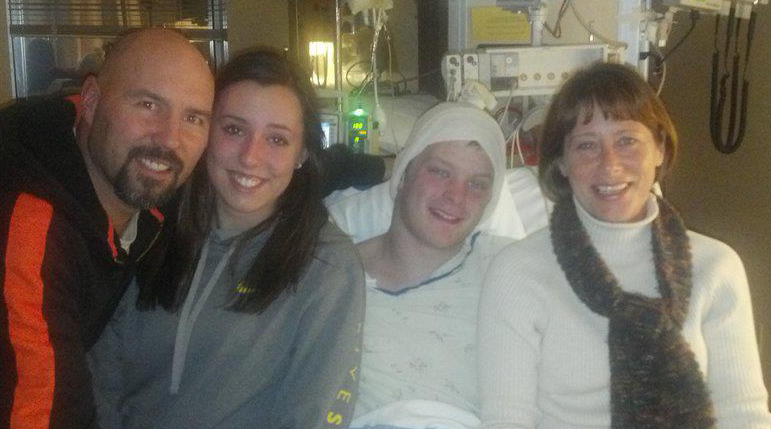 In the winter of 2009 Andrew Elwood was first diagnosed with Stage 3c Melanoma from a routine pediatrician check-up.

It is with great sadness that we report that Drew passed away on August 5th. Our sincere condolences to Sarah and Scott Pitt, Drew’s aunt and uncle, and their entire family, who helped raise and care for Drew.

Please consider making a donation to help his family meet their financial obligations incurred during his fight for life.

To send a donation, card or letter

Thank you for your love, support, and generosity.

In the winter of 2009 Andrew Elwood was first diagnosed with Stage 3c Melanoma from a routine pediatrician check-up and a simple skin biopsy of an irregular skin deformation (mole). He underwent a Biopsy surgery @ OHSU on the right upper bicep and a sentinel axillary lymphadenectomy (removal of first two lymph nodes under arm). This was followed by a 7 week course of Alpha Interferon Type 2-B Intravenous Chemotherapy @ Legacy Mt Hood Medical which forced his cancer into remission. He reluctantly attended Senior Prom while still recovering from the Chemotherapy and was even named Prom King much to his surprise (it is said he may have collapsed into his date’s arms in shock).

Andrew graduated from Corbett High School in 2010 and continued on down to Oregon State University to begin pursuit of a degree in Mechanical Engineering while performing in AFROTC to become an officer in the USAF. He had hopes of becoming an Air Combat Controller. During winter 2010, his Freshman Year at OSU, his next cancer reoccurrence was a second diagnosis of Stage 3b Melanoma. He was forced to withdraw for the term and return Home to receive another Biopsy surgery at OHSU on the right under arm and several treatments of focused Alpha Particle radiation at Legacy MT Hood Medical .After a short recovery Andrew returned back down to OSU for Spring Term. Having been medically disqualified from AFROTC Andrew changed to pursuit success in OSU’s German Partnership ATLANTIS Dual-Major Program in Mechanical Engineering/Material Science (w/ German Language minor). He continued pursuit of this through the rest of the 2011 freshman year. During the 2011 summer Andrew moved home to Corbett and trained and worked as a catering cook at McMenamins Edgefield.

The beginning of the 2011 sophomore year and fall term came and it was back down to OSU to continue schooling. Unfortunately in December, after declining health over the previous months and an ER trip after an potentially fatal incident one night while at work, Andrew found himself the next day in the ICU of OHSU with a third diagnosis of cancer. The cancer had progressed to Stage 4 Metastatic Melanoma. This meant it had gained the ability, through access to the Lymphatic stream or Bloodstream, to spread throughout the body. A tumor was found on the rear right lower section of the Occipital Lobe of Andrew’s Brain. It had bled causing him to lose significant primary visual cognitive functions, with swelling causing significant secondary symptoms such as extreme cranial pain. With severe risk of further growth, bleeding, and the loss of eyesight he underwent an Occipital Craniotomy (invasive surgery to remove the tumor). After an outstanding 2 days in the ICU and only 4 additional days inpatient Andrew was released home to Corbett where he moved back in with his Aunt and Uncle Scott & Sarah Pitts. He withdrew from college in order to allow recovery and treatment. Andrew received Radiotherapy (treatment of one high-dose gamma radiation “knife” to double the assurance the tumor had been treated)

Six weeks went by and Andrew just enjoy leisure and relaxation until one day after driving home from Portland and experiencing partial loss of eyesight, severe cranial pain, and facial numbness Andrew had experienced a stroke and fell to the ground his living room. Luckily he had already called on a sixth sense and extended family arrived and rushed him to the Legacy Mt Hood ER where after initial tests he was transferred to OHSU ICU later that night. Doctors soon told of the next reoccurrence, a fifth diagnosis, this time with 5 additional brain tumors of Stage 4 Melanoma. Two located in the Parietal Lobe, two located in the Frontal Lobe, and one located the Cerebellum, nestled close to the spinal column. The primary concern was for the largest of them, the tumor located in the Cerebellum. Further bleeding of this tumor was likely to cause permanent and severe damage, but removal of tumor require a surgery that had lower than a 15% chance of survival. If the tumor bled Andrew could lose any part of himself, but removing it had the likely chance of taking his life. At this point we can all make our own assertions as to what whether it be our faith in something higher or simply luck/chance, and remain respectful of the diversity amongst us all, but the bleeding stopped miraculously/luckily/by chance stopped. The surgery was not necessary. Andrew Was removed from the ICU after some time in observation and eventually all 5 tumors where treated with Radiotherapy in the same as the initial Occipital Diagnosis.

Andrew returned home to Corbett, where over the past few months he has been recovering appreciating every day, everything and everyone he has the luxury of living for. Since December he has experienced what many don’t in years, seen change in himself he never imagined, and gain a perspective on life he believes few truly grasp. When you walk hand-in-hand with death only then does he believe one can truly appreciate the deepest, purest, most beautiful, gifts this life has to offer.” We are the sum of our experiences.” ” For every negative a situation holds, there is always at least one positive, and more often than not many.” “There is purpose in everything”. These are all morals and aspects, beliefs and pillars that Andrew holds and lives by. But we digress.

A little over 8 weeks after the 5th diagnosis of cancer, Andrew met with multiple doctors over that time. Treatments were discussed and reviewed. Procedure followed until one day the board of doctors of Andrew’s OHSU cancer team ( Neurology, Oncology, Radiology, etc), met and collaborated, and decided that the best option for the future (considering all tests where clear and all cancer “treated”at this point) that observation, not further treatment (despite the request of Andrew himself) was the next recommended step. Andrew did not agree with that, and at that moment Andrew took the initiative and lead in his future and his fight to survive this disease. He pushed his doctor’s to be preemptive and go through with all options available. They met again to establish what option to take next. By this time Easter was here. Andrew was enjoying Easter Sunday with family when he had to be rushed to the ER after a sudden influx of severe cranial pain. Andrew was transferred from Legacy Mt Hood Medical to OHSU for tests. His doctors determined this as another reoccurrence and gave him the sixth diagnosis of 8 additional scattered Stage 4 Melonama cranial tumors occupying all lobes of the brain. The tumors are currently small, but too many for radiation treatment.

Therefore Andrew has started an oral Chemotherapy call Zelboraf that he takes twice a day at home. This treatment is making him extremely and severely ill with sometimes up to 15-20 simultaneous symptoms (Link to website detailing Zelboraf for those inquiring: http://www.zelboraf.com. Andrew has developed additional symptoms not listed or expected from his body’s reaction to this Chemotherapy. Some of this is due to the shear amount of secondary “maintenance” or “balancing” drugs required to try and suppress or ease the severe effects of the Chemotherapy. The drug is a figurative roller coaster ride with extremes at both sides. A peak could leave him feeling better than usual but in these times symptoms such as extreme mania which seem harmless could leave him sleep deprived for days because he feels so good. The troughs see extreme physical and neurological pains and even the chance of the drug causing more or newer skin cancers. The risk and struggle is great, but it is a necessary evil to fight for the gift of life.

Due to a severe risk to his constant safety Andrew’s uncle has left work to care for him full time. This leaves Drew’s aunt to work full time in an attempt to support the family and all their needs through this one year battle. During this one year treatment on Zelboraf there are plans to supplement his fight with two additional Chemotherapy treatments pending the effectiveness of each respective drug. If the Zelboraf sees positive result in the next months Andrew will start the Intravenous Chemotherapy Proleukin [IL-2] (Link to website detailing for those inquiring: http://www.proleukin.com/mm/Metastatic-Melanoma.aspx), an in-hospital ICU administered three week treatment. After that there are plans to supplement treatment with the Intravenous Chemotherapy Yervoy (Link to website detailing for those inquiring: http://www.yervoy.com), which is taken in a chemo ward every 3 weeks for 4 months. As you can see this young man of only 20 is doing everything he can, even when it means facing misery and pain, to take any opportunity to fight for his life. Hope is something that should never fade, nomater how dark the day;

There is always hope, Always.

Thank you to everyone for your love, support, and generosity.
top