Corbett Oregon is lucky to have and have had some really wonderful historians. They have spent a lot of their lives preserving history for us and future generations. Please send an email to suggest other local authors/historians to be featured on this site if you like! 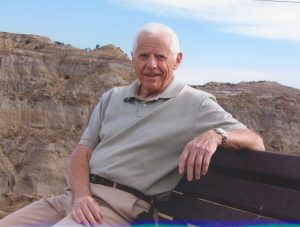 “Clarence Mershon died Friday, May 10, at age 82. He was a retired educator, author of 10 books of local history and a specialist on the Historic Columbia River Highway, Mershon was described as “a native son” who didn’t just know East County history, but taught it. His family received the Troutdale Historical Society’s member of the year award last spring. Mershon was born in Corbett and “saw his life and his family’s presence as part of the grand scheme of history.” A retired administrator from the David Douglas School District, he relished telling the stories of pioneer families.” – Pamplin Media

One of the books Clarence wrote, Women of World War II, features long time resident Jeanie Driver on the cover. At the time of the photo she was actually Jean McKillop and a cadet nurse. She met and married Frank Driver, who came back from being a prisoner of war. They are quite the love story and also part of the wonderful fabric of the Corbett/Springdale community.

Historian Clarence Mershon died of cancer at his East County home May 10. The retired educator, author of 10 books of local history and a specialist on the Historic Columbia River Highway, was 82. “A native son,” said David Ripma, president of the Troutdale Historical Society while describing Mershon. “Clarence didn’t just know our history, but he taught us about it.”

Ripma presented the society’s member of the year award to Mershon’s family at the our organization’s annual meeting, April 21. Mershon was to appear at the meeting, but his illness kept him at home. He appeared in a video presentation prepared by Len Otto. That video and completion of one more book on the Columbia River Gorge and Multnomah Basin were on Mershon’s to-do list at the end of his life. (Also on that list was gathering with friends to sing and record songs with his wife, Colleen.)

“Talk about a deadline,” he quipped, observing that he had a good life, that 82 was a good age, and that his chief concern was finishing his last book, which he did. “Life is so interesting,” he said, marveling at the events of his years. His illness surprised friends who knew the lithe, handsome Mershon as a dancer, karaoke singer, mountain climber, racing official at Multnomah Kennel Club and marathon runner and walker.

“We had hoped for a lot more years from Clarence. We had a lot more to learn from him,” said Otto, who worked on a committee with Mershon for an exhibit on the 100th anniversary of the historic highway. The exhibit, Otto said, will be dedicated to Mershon.

Mershon, born in Corbett in 1931, saw his life and his family’s presence as part of the grand scheme of history. Mershons settled on “the hill” at Mershon and Chamberlain roads in the 1890s. “My grandfather was killed by the Missoula Floods,” he liked to say, in telling the story of Alfred Mershon who died in 1918 while trying to dig up a large rock — likely a glacial erratic dropped by the Ice Age floods. The elder Mershon was killed when the rock moved and crushed him.

Inspired by the late Alice Wand at a meeting of the Crown Point Country Historical Society, Mershon, retired administrator from the Parkrose School District, interviewed pioneer families, sitting at kitchen tables, gathering photos, mastering the computer technology to self publish histories of Corbett schools and subsequently stories on the highway, its businesses, local farmers, the flower industry, for a total of 10 books.

Employing his near-photographic memory, he could recite chapter and verse of nearly all of the community’s long time residents. “His memory,” Otto said. “I wish I had a filing system half that good.”

The Mershons were instrumental in gathering the Charles W. Post art collection for the Crown Point society. It was in recording the history of World War II veterans, that Mershon, a Korean War veteran, got his hackles up when he discovered that the names of 12 of the area’s Japanese-American veterans were not on the veteran’s roster at a local church. He set out to correct the record, researching and writing their stories. His work on the Japanese was honored by Portland’s Nikkei Legacy Center.

His best selling book, however, was a history of the Historic Columbia River Highway, “which helped pay the bills.” Mershon’s wife of 63 years, Colleen, his high school sweetheart, joked about her husband’s inventory of books. “This stack is high enough to make a pretty good dressing table,” she observed. The two spent much time at local fairs and other events selling books. They were honored grand marshals at the Corbett Fourth of July event in 2007. Parents of four, they helped raise their oldest granddaughter as well. They have six grandchildren, and mourned a seventh grandchild who died of a brain tumor. There are two great grandchildren.

The family suggests contributions to the Troutdale Historical Society for its highway exhibit or to the Corbett Education Foundation for the Clarence and Colleen Mershon scholarship fund.